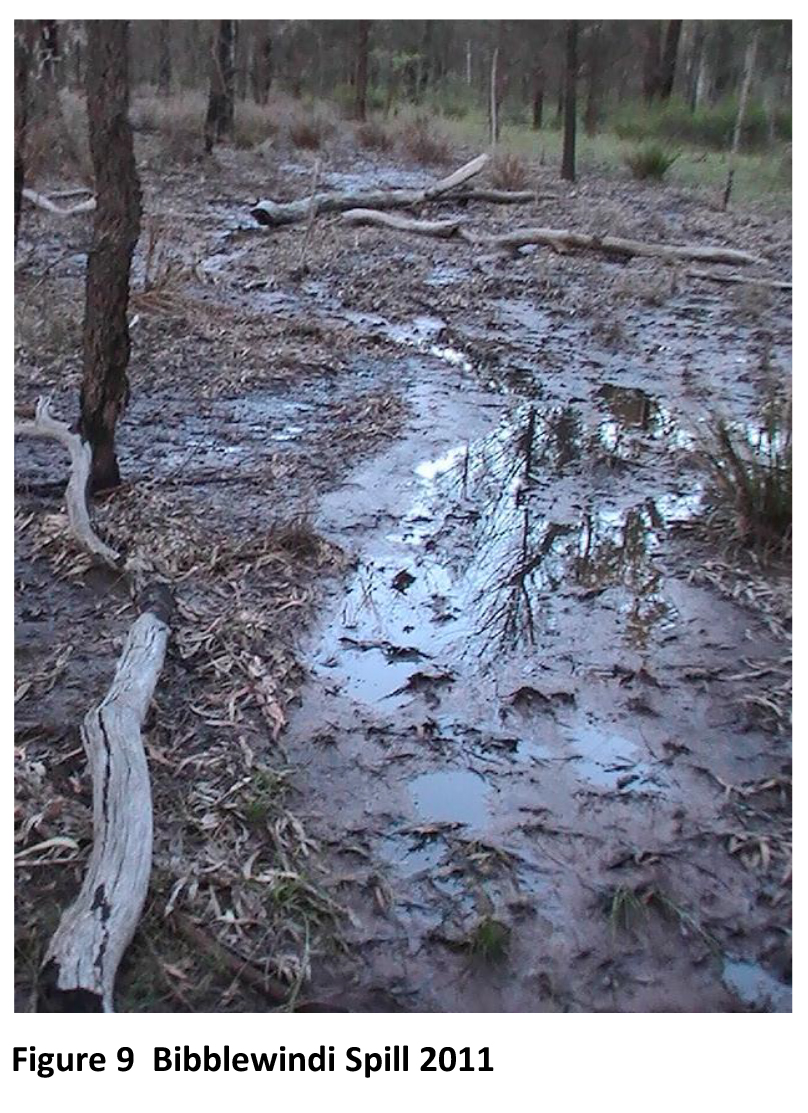 The Narrabri Gas Project has been responsible for a succession of spills, leaks and unapproved releases of produced water from sources that range from drill rigs, well sites, cuttings ponds, storage reservoirs, tankers, poor operating practices and poor container cleanout practices by contractors. Santos’ internal records show that many have not been reported as required by the Conditions of Operating and many of these events have been recorded and communicated only by community members.

Santos is not being proactive in its monitoring and/or not being honest in its reporting of incidents. Either way this is a poor way for a reputable company to operate.

More than 20 occurrences of spills, leakages and failures are known to date, many of which happened long after Santos purchased the field from Eastern Star Gas (ESG).

In mid-2011 a large spill (not reported at the time) of alleged produced water from the Bibblewindi facility decimated approximately two hectares of vegetation. Santos declared that “the spill was only 10,000 litres of water, some of which was recovered” which would equate to two cups of water per square metre. Obviously far more water than this was spilt as significant pH changes were measured (and reported by Santos’ consultant CH2M Hill) 277 metres from the spill site, to the depth of measurement (pH 10.0, 8.5 and 8.2 at depths of 0-50, 50-150 and 500-600 mm respectively, compared to a background level of 5.6).

The response by Santos destroyed its credibility in the eyes of the community and was highly disappointing for shareholders.

In 2012, the NSW EPA issued Santos with fines for 2 separate discharges into a local waterway of polluted wastewater from CSG activities at Bibblewindi by ESG in 2010.

Then, despite being formally warned by the EPA for a water discharge incident in 2011, in 2013 Santos itself was fined for a pollution incident which involved a leak from a CSG wastewater storage pond.

Santos has also been fined more than $50,000 by the NSW Land and Environment Court for four separate breaches of the conditions of its petroleum title, including the failure to report a leak of CSG water from another of its storage ponds in 2014.

Also in 2014, Santos was fined for contaminating an aquifer at the Bibblewindi water storage site, the first proven case of its type in Australia. A suite of heavy metals was found, including uranium at levels 20 times higher than safe drinking water guidelines. A run-off incident at Leewood in early 2016 has prompted the EPA to investigate the adequacy of Santos’ erosion controls on site.

Santos employees and contractors appear derelict in their duties. Santos has been issued with warning letters for storing environmentally damaging material at the Narrabri Operations Centre, while a long-term contractor was issued with warning letters and penalty notices for breaches of the POEO Act. In spite of these notices, a further complaint against Santos is pending with the EPA, where an employee was observed and filmed leaving a high point vent and its security cage open while he left the site. This is a clear breach of the Conditions of Operation for all water/gas line vents, imposed by the EPA in 2015 after an automatic vent failed and released water and gas into the environment.

While it was clear that the infrastructure Santos acquired with its $924m takeover of ESG was poorly constructed, it is also clear that it is now poorly operated.

It is highly embarrassing that the community is usually the one to identify, document and communicate first about these spills and leaks. It is also disheartening that Santos doesn’t seem to be able to prevent these types of incidences from happening time and again.